The current pattern, known as a bearish WXY Wave looks to be ending on Monday. The positive astro aspects of Sun trine Jupiter 10/15, Mars trine Jupiter on 10/18 are being replaced by the Sun sq. Pluto on 10/16, and also Mercury and Jupiter turning stationary/direct on the 18th (Bradley turn 10/16).

There is a lot of liquidity floating around and no sign of FED tightening in the cards (not until after Jupiter moves into the sign of Pisces at the end of December, so I don't expect a huge crash ahead, that may come by around March of next year, but still I could be surprised), but more due to socio-political-economic instability in the coming months with the intense triple Saturn/Uranus square not seen since 1931 (Great Depression) and before that in the early 1860's coinciding with the American Civil War (on top of the aspect, Uranus is in the 84 year cycle of Taurus in Uranus, which happened before the American Revolution, the American Civil War and WW2!!!).

The Scorpio Sun/Mars conjunction is about investigations and uncovering secret things and it is working with the highly convulsive triple Saturn in Aquarius square with Uranus in Taurus in latter October and into Mid November.

This is about the tearing down of the Old Order (oddly called the New World Order) and the rising of the masses to take back their countries. This process has a ways to go, but short term victories for the Patriots look to be forthcoming over the next two months and especially into the first 2 months of 2022.

There are and will be repercussions ahead that we are not prepared for, much like throwing a pebble on a still pond (I will be going over this more in our coming video series "The God Weavers").

The economy is definitely one of them and so are the various foreign entanglements we have gotten into (China, UN etc). The biggest issues coming forward and being uncovered publically soon will be the Deep State's attempted totalitarian take over of our country, the voter fraud issue, CRT being taught in schools and why, and the "mark of the best" United Nations led vaccine mandates.

The last of the triple square of Saturn and Uranus this year will occur on December 24th. Venus turns retrograde on the full moon of the 19th of December and joins Pluto in Capricorn on the 25th. Sometime between the 21st and 24th of December should see the final bottom. 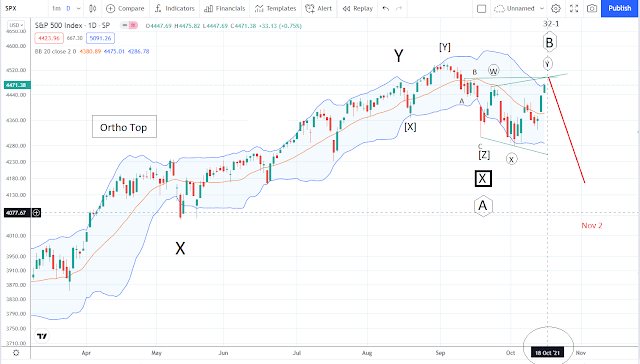 The good news is, there should be a strong rally into Jan/Feb next year, but around March/April looks possibly vulnerable for another big down draft (4600 to 3200?).
The very fabric of our society is in convulsions, but I do expect some positive surprises come late November and especially month end December when Kim Clement prophesied the return of Trump around Christmas. Kim Clement also prophesied that we would have a mesmerizing November and December (more on this on our website). Sit back and get some popcorn and watch the show.

For more information about us, please go to Christian Patriot Media. I'm offering a two week free trial to BluStar Insights. Just e-mail us and say the word: mesmerizing.

Posted by Brad Gudgeon at 2:08 PM No comments: