The weekly chart below of the S&P 500 looks ominous! Today has Saturn in Aquarius squaring Uranus in Taurus! This square happens again on June 14 and December 24 this year!

Saturn is the planet of rules and boundaries. Uranus is the planet of freedom and rebellion.  Uranus is in the 84 year cycle of Taurus last seen from 1934-42. The 84 year cycle is the same as the Fourth Turning of four 21-Year Generation Cycles. History proves that the Uranian/Taurian Cycle occurred during times of great financial upheaval that preceded a major crisis war.

The Great Depression of 1929-42 also occurred during this time ending just as WW2 was just beginning.  If history is any marker, we should see another major financial panic sometime within the next 1-3 years, followed by another great war! 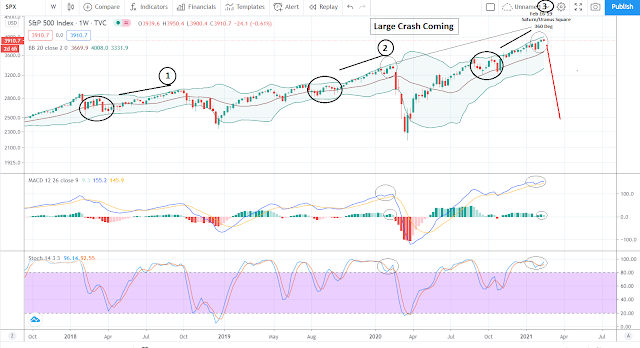 What is interesting is Uranus rules Aquarius, which zodiacal sign Saturn is in. Uranus is in Taurus which its downfall.  It is as if the two planets are in contradiction to one another.  Mars is currently in detriment in Taurus conjoining Uranus against Saturn, the old guard.  Uranus does the unexpected. Mars is warlike!

Something is about to hit the stock market very soon that will likely shock the world. Uranus and Mars combined suggest something unexpected and warlike coming along the lines of political, financial and social institutions becoming exposed!

We are moving toward a collapse of the old order and the rise of a new order founded again (like 1776) on the principles of freedom and individuality! This movement is not without its problems as the old guard is not likely to give up its power too easily, hence, the move toward conflict, market volatility and eventually a major world war.

What we do as a collective, will either exacerbate the problems we face or mitigate them somewhat as we move forward to help us transition into the next stage in our spiritual evolution.

Mention the "McVerry Report" and receive $200 off our annual subscription. Offer good through the end of February .